After over 13 years in Hong Kong, we managed a trip to Bali for the first time, and managed to coincide it with our wedding anniversary.

Beautiful Bali, exotic Bali, wonder why we never managed to see it before! But now we are firm fans: definitely a placed we’d go to again and again. For those who are considering Bali as a holiday destination, we hope we can present a balanced opinion to help you make up your mind. For those who know Bali like the back of their hand, hopefully our experience will resonate with you, and perhaps you have more to share. Do tell!

The Rant (we'll keep it short): Bookings were a total pain. Maybe due to the Golden Week in China, but we just could not get decent direct connections from Hong Kong, instead having to fly via Singapore. To be avoided if possible, because it adds a whole 2 days to your trip. We flew HK-Singapore-Denpasar on 5th October, and returned on 10th, which gave us 4 whole days in Bali, and brief transits at Singapore Changi Airport.

And now... the Raves
We were adamant about staying in Ubud, which is in the interiors of Bali island – this is because we prefer forests and farmland over beachfronts and bikinis. Strangely, it seemed everyone was thinking like us: we were getting bookings at various beach resorts like Jimbaran, Kuta, Nusa Dua and Seminyak but not at Ubud. Had to settle for the only one available, Furama Villas. Nice property and facilities, but not so nicely maintained. We landed at Denpasar late evening, and took an hour to transfer to the hotel, which we reached at 10:30pm.

5 days - 5 experiences!
Next day, we decided to take it really easy, and spent most of the morning at the hotel exploring the villa and its limited food options. In the afternoon-evening we took the villa shuttle to Ubud town which was around 30 minutes away, returning after dinner, plus two umbrellas hastily purchased to shelter from a downpour. This was like a welcome shower, weather otherwise was fantastic all the way through: warm and salubrious in the mornings, nice and nippy in the evenings.

Day 2 and Day 3 were the “active” days. Obviously the word is very relative - given our somnolence and reluctance to even lift a finger or a toe towards any extra effort, this was itself a big deal. On Day 2 we drove… and drove… and drove to the north east of Bali towards the volcano and Batur Lake at Kintamani. The destination itself was nothing to write home about, but it gave us a good opportunity to get a feel of the place.

We also saw the Goa Gajah (or elephant cave) temple – probably one of several similar temples dotted around the island – goa or gua is like “Guha” or cave, “Gajah” is elephant like in Sanskrit.

On Day 3 we drove in the opposite direction towards the south west, first to Uluwatu temple and then to the seaside temple at Tanah Lot, passing by various beaches on the way.

Day 4, our anniversary, was a lazy one. After a nice morning walk on the village roads surrounding our villa, we had a long slow spa session followed by lunch. Evening was Ubud village for some shopping, followed by a leisurely dinner at Café des Artistes.

Day 5 we spent all the day flying back home after a short but lovely and leisurely holiday.

Here are some of our observations.

Flower Power
The Balinese use of flowers is high and innovative. Frangipani is everywhere: both real and in paintings, and define Bali almost. They adorn steps in a neat arrangement, or women’s hair, or sometimes playfully tucked behind the ear of statues, or even left “accidentally” around on the pillow, in the shower area or on the towels!


Here's a picture from Uluwatu Temple 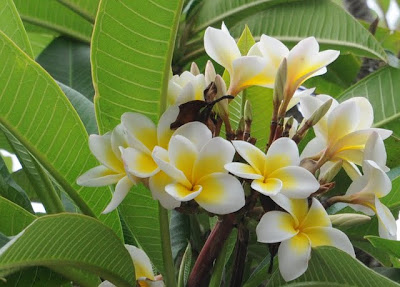 Very evocative of an exotic Asian feel, the stuff novels are made of! Flowers are also put together on a betel leaf like leaf and placed as offerings to gods, outside houses/temples. Somewhat similar to the role played by rangoli in India.


Long and Narrow are the Roads in Bali
Didn’t realize Bali was so spread out until we actually experienced it. Friends had warned of traffic, but we were still shocked by the reality of it. If there is one thing that may work against visiting Bali, this has got to be it – distances feel longer than they are, and traffic is painful, so I predict our repeat visits if any will end up being even more comatose and restricted to the area immediately around our lodgings. Narrow roads and frequent traffic jams mean that average speeds are very rarely above 40 kmph, and a relatively small island suddenly begins to feel large! The saving grace is that there is no horn-abuse!

Check out the map of Bali - doesn't it look like a Kiwi bird?
We were fortunate that our driver was as laid back as we were. Sukra Wiguna has a car and is more than willing to drive you around. He is soft spoken and knowledgeable and it was good to have him drive us.  Thanks, Pushkar and Bashuli for getting us in touch with him. Sukra also told us about his dreams and ambitions: he is on the verge of opening a shop that sells Chinese style dessert and he wants to visit India. We hope his dreams are fulfilled.  Sukra may be contacted at +62 819 1732 4070.

Are you from India?  Are you Hindu?
There were so many things which were comparable to the known and familiar in India! Temple and building architecture for example – the gods were quite familiar. Typically Ganesh or Vishnu. The layout of the temple included shrines to several gods, but always had nine pillars probably corresponding to our navagraha (नवग्रह). The grey and burnt orange combinations were beautiful; I could even imagine a sari with that combination. Most of the temples are still in use. We got the sense that almost every other road or village had a temple, there were so many littered around Ubud. One difference was the Balinese’ endearing treatment of their statues, just like humans, most of them are clothed! Typically black ‘n white check sarong called the poleng, which is supposed to be holy.


A majority of Balinese were very happy to hear we were Indians and Hindu, as are they. Of course, the definition of Hindu / Indian varies quite widely, depending on the person spoken to. Some think it is devotion to Sai Baba, others have deified Bollywood actors Shah Rukh Khan and Amitabh Bachchan! As you may imagine, epic movies like “Asoka” enjoy a wide viewership here. Familiarity with the Gods’ names is very high however. Statues of Garuda / Hanuman / Ram / Ganesh are routine to them, but magnificent and unique tous! Highlight was that we even saw silver finger rings of Ganesha in the shops.What was most curious to us though was the apparently casual style of shopkeepers in stocking hoards of stone statues outside their shops even overnight: no lock and key! Either they are so invaluable or the level of honesty in Bali is high, or maybe the laws of demand and supply are very lopsided towards net high supply (this is our theory). Felt rather ghostly to drive through this area at night – a whole street of ghostly personalities standing motionlessly in a challenge to time.

A number of Balinese are almost veggie but eat fish. Our driver, Sukra, also informed us that the most common meat in Bali was pork!  For us though, vegetarian food was no problem at all, though in most cases, it defaulted quickly to the lowest common denominator of nasi goreng or sayur lodeh or nasi sayur. Sayur is the word for vegetarian.

We enjoyed most of our meal experiences. Among other places, we ate at some of these restaurants and would be happy to go back for another bite:
It was interesting to see that many restaurants have huge garden areas with open air dining around a courtyard towards. When the weather is good, it can make for an even better dining experience!

Have Land, Will Use!

What was striking and quite charming was the strange juxtaposition of various things all together. For instance, a temple right outside the villa we stayed at. Or, farmland in the middle of civilization. And a Painting gallery in the middle of  an industrial park. Though of course, we did see entire streets (and even villages) with art galleries, or ones with stone statues, or others with jewellery as artisans of a particular trade are wont to gather together in an area. We wondered at the efficiency of such town planning, though charming to the beholder.

No matter what the land was used for in any village, there would always be temples. And from somewhere in the background would come the faint sound of flutes. We did observe much less of this once we were outside the Ubud area... and in the more urban parts of the island (eg, Kuta, Jimbaran, Denpasar, Seminyak), temples were few and far between. 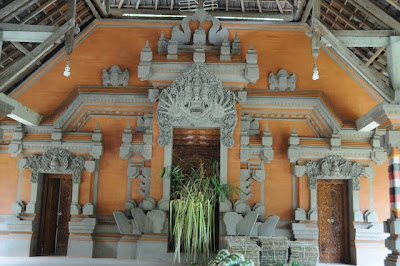 And all over Bali, it was a common sight to see the people make offerings (canang sari) in front of their homes or shops on a daily basis. Small baskets made of pandanus leaves with tiny portions of cooked rice, flowers, and others things make up a typical canang sari. 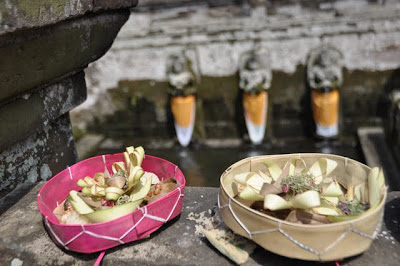 Ubud Writers & Readers Festival:
We were quite surprised by this fairly significant event that was taking place at the same time. Indeed, we think this could be the reason why hotels were running so full in the Ubud area. This festival seems to be a fairly well known one, somewhat like the one in Jaipur every year. Like most other literary festivals, they had a number of venues, and a number of visiting authors and the glitterati of literati. All seemed to require bookings in advance so we couldn’t take advantage of it, but in our minds, we thought this could be something for our Literary Group to do at some point in the future.

We loved the logo of the festival too...

Shopping
There's lots to browse and buy. Around Ubud, the cultural capital of Bali, there were shops, streets and villages that sold handicrafts, statues, furniture in wood and rattan, paintings, batik, silver and gold jewellery.  In Ubud town itself, Monkey Forest Street is a good option for retail therapy.

Moneychangers
Moneychangers can be found all over the place. But be careful of where you exchange your $ for Rupiah to ensure that you don't get counterfeit currency palmed off to you. Also, rates vary - so its good if you scan the street before you swap. We were happy with Pt Dirgahayu Valuta Prima (www.balibestrate.com).

Sanskrit roots
It was very interesting to observe the use of words in Balinese and Bahasa Indonesia that are derived from Sanskrit.  Here are a few examples:

What we didn’t do this time (but would like to do next time)
Pictures
Check out all our pictures!